Have you played Threes on iPhone? It turns out the game was made accidentally
Most outstanding games on Microsoft’s Xbox 360 gaming console

Child of Light may be a little difficult to digest in the beginning. The feeling of sadness and delicacy it indulges is alluring yet somewhat pessimistic. The creators developed a world in which everyone would like to reside, at some point. If your life didn’t bring you enough nostalgia and melancholy until now, playing Child of Light is the best method to try some of what those feelings have to offer. The dreamlike world the game supports will make your daily struggles feel incredibly real. 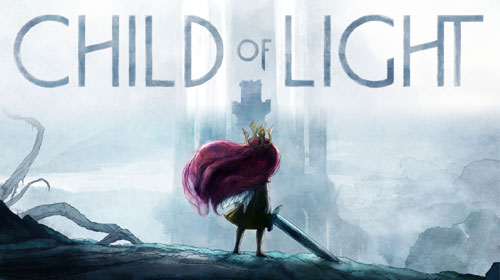 Not many accepted Child of Light upon release, and that was because the game’s open world was way too gloomy. Don’t confuse color for happiness, as the game is everything but happy. It’s certainly well-made. The graphics, the visuals, even the purple hair of Aurora, the main character-player, are enticing.

Child of Light reveals its true nature from the very beginning

It all begins with a stained-glass scenery that reveals Aurora, the protagonist and character-player in the game. She’s involved in a discussion with her father and she’s particularly sad for losing the Kingdom. The storyline is about deep emotional struggles that will certainly appeal to the sense of the avid player. The intrigue features betrayal, fear and hopelessness. Aurora’s faith to find her own freedom is what makes the gameplay evolve.

Aurora and her companions

Aurora’s companions are not stereotypical. She joins a jester, who lost contact with her beloved brother and only craves money, a gnome with an avian disease, and Igniculus, a firefly who becomes Aurora’s only true friend. He can light up pathways in dark surroundings, and collect treasures other characters can’t.

As soon as Aurora learns how to fly she could no longer jump as she used to. She floats in a foggy and rainy atmosphere. When a path is not available, the ability to fly no longer functions. The Nature and atmosphere start to reject the path Aurora chose. In other words, paths that can’t be explored receive a response from Nature through aerial barriers.

Exploring the pathways – a mystical adventure

Child of Light is not your average type of game. It is packed with hidden passages, treasure chests and dangerous settings. The landscape is both incredibly beautiful and unexpectedly dangerous. Enemies are lurking, creatures are waiting for your presence and the gloomy ambiance of the whole surroundings will make your skin crawl.

Aurora is extremely brave. She’s not afraid of a little confrontation, which is why she wields a sword each time she’s in danger. Running away from the creepy monsters is not an option if you want to gain your freedom. Boars and wolves will start growling their displeasure, ethereal horses and flaming birds will bar your path, and your only chance for survival is to fight.

Child of Light is this year’s most appreciated game release thus far. We cannot believe how beautiful and alluring it can be. It will be difficult for a player to accept the sadness presented at the beginning of the game, but as you advance your feelings will change. Child of Light is like a really graphical movie where the main character must fight to get her kingdom back.

Are you ready to be mesmerized by Aurora? You should be. The game is an adventurous journey like Army Games 365, a quest where the character-player must fight for her freedom. Apart from the incredible settings and striking visuals, Child of Light is extremely well-made from start to end. It’s a superb story about betrayal, fear, and fortitude every gamer should experience.

View all posts by John Smith →
Tweet Pin It